The Spirit of 1000 Miglia at the Concours on the avenue, Carmel by the Sea

Great success for the Red Arrow at the Carmel by the Sea Concours on the Avenue.

The Spirit  of 1000 Miglia medal number 1 and the homonymous trophy were awarded to the O.S.C.A. 1952 1100 Berlinetta Vignale: the car, which sports an extremely original coupé bodywork was designed for Le Mans and there, in 1953, it won  the first class prize and the 17th absolute place.

At the Concours on the Avenue it was also proclaimed Best of Show!.

The owner, Phil White of Portola Valley, California received the awards from Francesca Parolin, General Manager of 1000 Miglia srl, during the award ceremony along Ocean Drive crowded with public and cars on display. 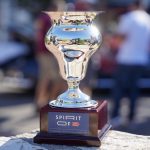 The Spirit of 1000 Miglia trophy 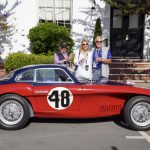 The owners and Francesca Parolin